The landscaping design takes into the account the building next door at 54 Marsh Wall and has been influenced by three principles:
• Enhancing current landscaping,
• Enhancing connectivity and
• Creating a sense of home for the new community of 56 - 58 Marsh Wall.

These proposals aim to enhance current landscaping, support sustainable drainage and mitigate pollution. The site presents a number of opportunities to achieve of aim of enhancing current landscaping and a number of ideas are currently being explored, these include:
• A well connected public realm
• A community plaza
• Removed trees to be replaced with a higher number
• Potential pocket park for local residents and an informal play area
• Potential for planted buffer zones
• Proposed rain gardens and potential to introduce more rain gardens within Byng Street

The proposals have been designed to connect with the wider context of the Isle of Dogs, integrating with nearby streets and open spaces.

We have provided a series of images of how the new landscaping space will look.

The proposals also incorporate a landscaped roof and winter garden comprising of a BBQ area, trees, shrubs in planters, benches/planters, a pergola, indoor planting and trees as well as a preserved moss wall.

Refuse will be collected from within the site boundary. Refuse vehicles will be able to access and depart the site via Byng Street. Should the Liveable Streets team proceed with the pedestrianisation of Byng Street, it will be possible to introduce moveable bollards to allow service vehicles to access the site.

The number of bins has been calculated using London Borough of Tower Hamlets standards provided in Appendix 4 of the Tower Hamlets Plan 2031. Bins will be stored in the basement and wheeled out on collection days.

Current estimates suggest that 61 bins each holding 1,100 Litres will be required. Node are currently investigating the possibility of using a waste compactor to reduce the bulk of the waste, thus reducing the number of bins required.

Here we can see how the basement will be laid out. The bin store is marked in orange with the refuse chute marked in green. As discussed above, the possible waste compactor is marked in grey. Click the image below to view it in a larger format. 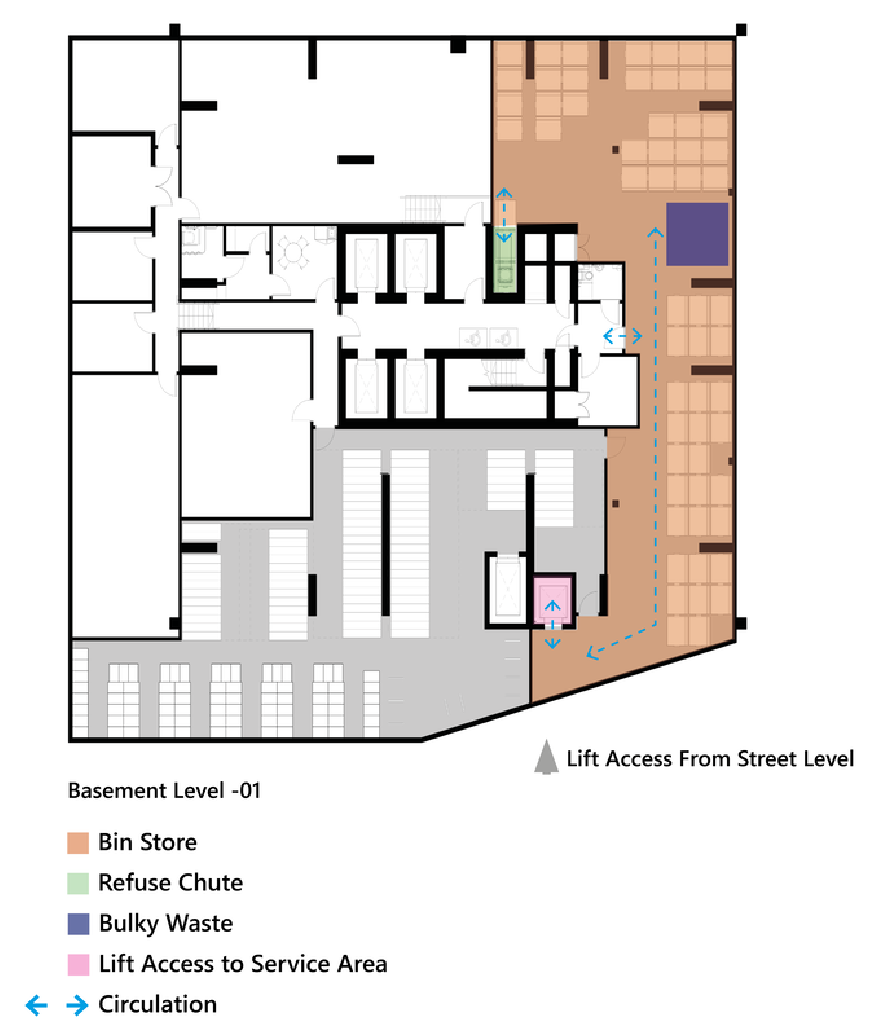 In addition, 21 short stay cycle parking spaces (Sheffield Stands) will be provided within the public realm. This is in accordance with the London Plan.

The proposals are for a ‘car free’ development meaning there will be no on-site parking. It is anticipated that the majority of future residents will be working in and around Canary Wharf which is within a ten-minute walk of the development.